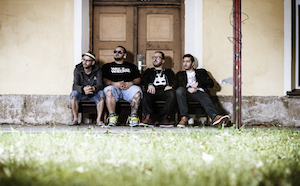 Wax Wreckaz are a DJ-/production-outfit hailing from Austria, to be exactly from Innsbruck. A small city surrounded by mountains, green meadows filled with cows in summer and loads of snow and thousands of ski-tourists in winter. The crew consists of Busy Fingaz, Juwee, Fu and Sensay. Four music lovers that although growing up with different social backgrounds – ranging from punk rock-loving-skateboard-kid to being a conductor’s offspring with classical music education – the four of them finally met in the year 1999 in a graphic design school and the rest is history.

Their tunes got airplay on radio and web radio stations all over the world – from the USA to Canada, India, Trinidad Tobago, UK (BBC Radio1 & Kiss FM), France, Germany, Austria to Russia and Australia.